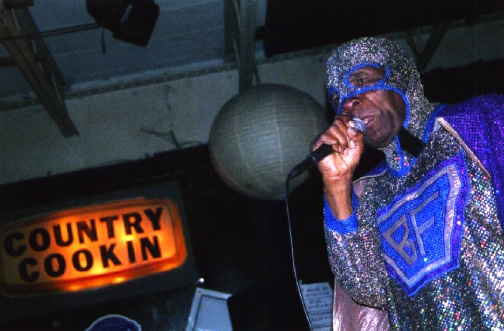 I’m sad to report that Florida music legend Clarence Reid, also known as Blowfly, has passed away. It was announced last week from the official Facebook page he had gone into hospice care due to terminal liver cancer and passed away today, four days later.

My introduction to Blowfly and his music was finding just the cover of Blowfly’s Party at a thrift store in Orlando sometime around 1999/2000 with those infamous photos of him dressed as a superhero surrounded by naked women. It took years to actually track down a real copy and hear just what the hoopla was about with songs titles such as “Nobodys Butt But Yours”.

When the documentary of his life The Weird World of Blowfly premiered in 2011 Blowfly came back to Orlando and I was lucky enough to attend it along with a Q&A session after the film ended.

Some photos of when he performed at Wills Pub in Orlando in 2006 are in the Kick Bright Archive.

Blowfly will release his last album “77 Rusty Trombones” in February 2016.

Other Webpages and Zines

AdamTheWoo
Shows I Go To - Concert Reviews & Stories.
Hot Hands: Lost In America
In Terms Of

Reviews of lectures, panels, interviews, and other live speaking engagements in the visual arts and the humanities